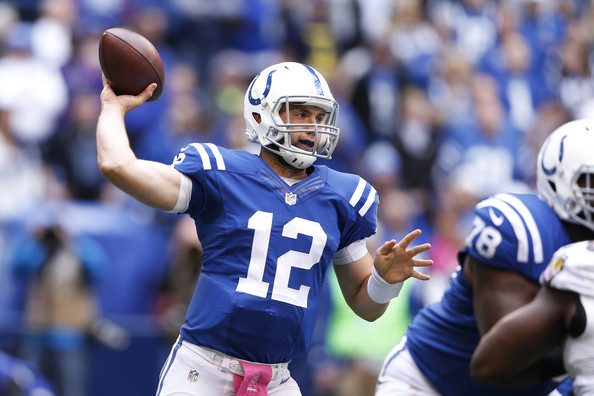 My schedule’s been a little crunched this week so I’m picking this game ahead of the Sunday games in the interest of time.

Colts (3-2) @ Texans (3-2): This game has the potential to be the best Thursday Night Football game of the season; that’s not saying much. There’s nothing that leads me to believe that the quality of this game will be any better than the other TNF match-ups simply because these teams are on four days rest.

Andrew Luck leads the NFL in passing with 1,617 yards, 14 TDs and 6 picks with underwhelming offensive personnel. Reggie Wayne is certainly on the downside of his career while T.Y. Hilton can’t shoulder the weight of a passing attack. Dwayne Allen has been superior to Coby Fleener at tight end and Ahmad Bradshaw is simply better than Trent Richardson in that backfield. With a decimated offensive line, J.J. Watt should have a big impact in this game.

The Colts defense is slightly underrated. Although I like Ryan Fitzpatrick as a gun-slinger, I don’t know if he can keep pace with Luck in a shootout. DeAndre Hopkins could have a big game but it might not be enough. The better team has won these Thursday games and that trend continues in this battle for first place in the AFC South. That team is the Colts.