I know, I write about receivers a lot. But you know why? Because it’s the coolest position. Everyone loves a great receiver; I’m no exception. Who doesn’t want to be the guy that goes up and grabs the game winning touchdown? So this post is about the guys who will soon have a chance to do that for a living. These are my top 5 favorite receivers in this years draft. 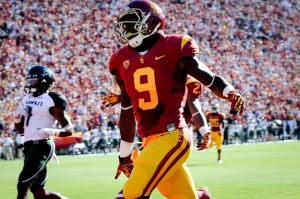 Here’s a guy who was considered to be a top 5 pick a year ago. Instead, Marqise Lee is just another brick in the wall of an incredibly deep and talented wide receiver class. At 6 foot, 192lbs, Lee is truly his own receiver; I can’t think of anyone in particular to compare his game to. Maybe a mix of Marvin Harrison and Pierre Garcon; same heights, similar weights. He plays bigger than his height and has the moves to turn a 7 yard gain into a 77 yard gain. He’s got the drive and passion, which is great in today’s NFL where we see less and less emotion on a down to down basis from WRs. Lee is a prospect that I don’t see failing in any situation. He’s going to ascend to number 1 on the depth chart wherever he goes…and quickly at that. 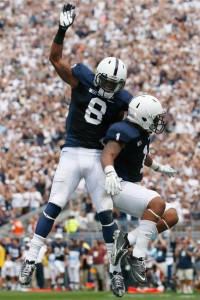 Ok, so maybe this one’s a little biased. But then again, maybe it’s not. I got to watch all 3 years of A-Rob’s career at Penn State, and I will tell you now, this dude can pah-lay. Some were a bit disappointed by his combine 40 time, but speed is not his game; he’s a go-up-and-get-it guy. He had the 3rd longest broad jump and 6th highest vertical jump at the combine, which still doesn’t do him justice. You just have to see him make a play when he’s got the adrenaline going. I’ll never forget calling the epic 4OT game vs Michigan from the press box last season when he made the play of his career that set up the score to send it to overtime. That’s just one example of how flawlessly he times his jumps. He also thrives in the screen game – a method Bill O’Brien employed to force feed him the ball – which helped to crown him as the best receiver in the B1G for 2/3rds of his career. That same screen/sideline game translated over to his master skill at cutting back between the safety and defensive back to make a score countless times, like he does 15 seconds in to this highlight reel. Being 6’2″, 220lbs doesn’t hurt either. He’s one of a kind.

The 2013 Biletnikoff award winner has been on my radar for some time now. Mid-season I’d be checking random stats and I see this guy leading the nation in receiving. Who? Brandin Cooks from Oregon State? Is Oregon State even good? Well, by now he’s on everyone’s radar; and rightfully so. After running the fastest 40 time of any wideout at the combine (4.33) and second fastest overall, Cooks has propelled himself into the 1st round conversation. To me, he’s one of the top 5 “playmakers” in this draft. His sticky hands and jackrabbit quicks instantly add a dangerous dimension to any offense; plus, he’s a skilled return man. Cooks is another guy whose game can’t exactly be compared to anyone else’s; he’s short at 5’10”, 189lbs, but has the build and agility to play above the measurables. There’s still room for him to beef up, but Cooks is a top 25 prospect for 2014.

Matthews was one of the first receivers to be talked about at the start of last season – and as remarkable of a year as he had (4th nationally in receptions and receiving yards) the attention seemed to stray toward the likes of the Sammy Watkins and Mike Evans. Meanwhile, here we have, in my opinion, the most well-rounded player in this entire draft; leadership, consistency, attitude and playmaker are just some of the many words that can be associated with this young stud. Like all the previously mentioned receivers on my list, Matthews’ game is his own; comparisons fall by the wayside. It’s another reason I love this class so much; they’re all unique individuals who will bring a new flare to the NFL. At 6’3″, 212lbs with a flashy 40 time of 4.46, he’d be a heavy value pick in the second round. 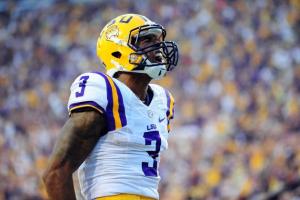 I would go so far as to say that Beckham is one of the top 3 athletes in this draft next to Jadeveon Clowney and maybe Khalil Mack. It’s honestly stupid how freakish he is. At 5’11”, 198lbs, he’s been a star at basketball, baseball, football and soccer at different points in his life. He can catch a ball literally anywhere on the field, run any route type and has the perfect frame to be used in any scheme. Back at LSU, Beckham and Jarvis Landry made up the top wide receiver tandem in the country. I truly believe this kid will be one of the top 10 receivers in the league in 2 years. His aggression and intensity at the catch point are unrivaled. Also not to mention he’s one of the best return men in the nation. If you’re still not convinced, check out this article recapping his remarkable 2013. Odell Beckham Jr. will soon be having his way with NFL defensive backs; just you wait and see.

Many of you may be pulling your hair out over the fact that I didn’t include at least Watkins and Evans in this list. Sure, they’re amazing athletes and great college receivers, but I’m not thrilled by their intangibles. All 3 of these guys seem like they kind of just go through the motions, assuming they’re going to be a first round pick because Mel Kiper said so. Watkins maybe would be number 6 on this list, but as for Evans, I’m just not a fan of his vibe. And as for Benjamin, if you have Jameis Winston throwing darts at your solar plexus every play, then I haven’t seen enough from you. Let’s talk again when he’s got Christian Ponder or Chad Henne throwing that duck 2 feet in any direction from his head.

So there you have it, my 5 favorite wideouts in the 2014 draft class. Don’t agree? Say somethin’ why don’t ya!